Hello fellow Romance fans. I'm here to explain my obsession with Gypsies.
I've always been very curious about Gypsies—Roma or Romani, as they call themselves, Those rather mysterious people came from India to Europe about a thousand years ago and lived a wanderer's existence and kept to their own ways for generations.
My fascination began when I was a small child in Africa. One evening my dad was driving somewhere with me and we passed a little Romani fair, a few lights in the darkness, music, some horses, a little merry-go-round. Very enticing to a small child who lived on a farm in the middle of nowhere. I wanted desperately to go to the fair, but my dad said we couldn't and that he believed Gypsies were thieves.
Indeed the next morning all out chickens were gone, every single one and the dogs hadn't barked and no one had heard a thing. If you know anything about chickens you know you can't just pick them up and tiptoe away because they'd start squawking and pecking you like mad. My parents were not pleased, but I was thrilled. It was often my job to feed the chickens, and I was rather scared of them. But mostly I was awed. How had the Gypsies done that? It seemed magical.
Now I am in the middle of writing a series of short sexy stories featuring Gypsies during the Regency period. There will be one coming out every month or two with Breathless Press. 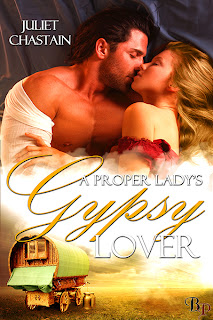 Here's the first story in the Gypsy Lover series, A Proper Lady's Gypsy Lover
Forced to become a proper young lady, Lucy-Ann Spencer rebels against the rules of high society to claim her freedom and her Gypsy lover.
Dragged off to London kicking and screaming, Lucy-Ann Spencer refuses to become a proper young lady. Despite her aunts' insistence, she spurns the suitably titled and wealthy men who court her, longing instead for the Gypsy lad and the freedom she once loved.   Liberty Wood never forgot the girl he adored years ago, but now that she has become a proper, silk-clad member of high society while he lives by his wits, he knows that they can never breach the gulf between them. Can Lucy-Ann convince him otherwise?
Here is an excerpt:
Lucy-Ann scrambled to the window, tempted to climb out had the carriage not been moving so fast.
“Liberty,” she screamed. “Liberty, help me!” She leaned out as far as she dared while her aunts cried out to her to be careful. Aunt Emily took hold of her waist.
Lucy-Ann saw him, Liberty Wood, on his brown mare with the white forelock, riding hard after the coach.
“Liberty,” she called, leaning out yet a little farther, causing both aunts to shriek. Aunt Louisa took hold of her legs and called to her to come back inside. Lucy-Ann watched Liberty slowly close the distance between himself and the carriage.
“Halt!” she called to the coachman. “Halt!” The coachman pulled on the reins, slowing the horses.
“No!” cried Aunt Louisa. She stuck her head out of the opposite window. “No, “ she cried out. “Move on as fast as you can, Elijah. You must outrun that highwayman or beat him off.”
The carriage picked up speed again, swaying precariously, but Liberty had caught up. He’d always said the mare was the fleetest thing on four feet.
Leaning on the neck of his horse, his black hair flying behind him, Liberty smiled grimly at Lucy-Ann as he passed the carriage. The mare pulled up beside the carriage horses. Lucy-Ann realized his intention was to come up beside the lead horse, take hold of the beast, and bring the carriage to a halt.
“Actually,” she heard Aunt Emily say, her voice quivering, “I’d prefer to go more slowly. This is dangerous.”
“You’ll have to beat him off, Elijah,” Aunt Louisa ordered at the top of her voice. Lucy-Ann saw the coachman nod and reach for his long whip.
“No!” Lucy-Ann screamed. “Please, no.”
The coachman stood and, holding onto the thong, swung the long handle of the whip, catching Liberty in the face, causing him to somersault off the mare and into the mud at the side of the road. The carriage almost careened off the road as the aunts screamed and clutched each other. When it stabilized, Lucy-Ann tried to climb out of the window, but her aunts held her back. Eventually she collapsed on the floor of the carriage, weeping uncontrollably.
You can buy this story at. breathlesspress While you're there, check out my two short romances: The Captain and the Courtesan and The Cry of the Wolf.
To learn more about upcoming stories or about me: julietchastain.com You can contact me at juliet@julietchastain.com. Or on facebook .Or follow me onTwitter
Posted by Marci Nichelle Jansen at 2:38 PM