Under the Covers - Guest Author H.B. Pattskyn Talks About Bound: Forget Me Knot

Please welcome fellow Author H.B. Pattskyn to my virtual soapbox!  As you know, Under the Covers is a place where authors can rant about or discuss rationally (if any of us can!) issues that have come up with feedback about their books. This is a place where they can address misinterpretations, or just offer an inside view into why they wrote what they did.

This NOT a forum to bash the author or start arguments with them and anyone doing so will be publicly shamed by me on Facebook. And you *know* I'll do it! 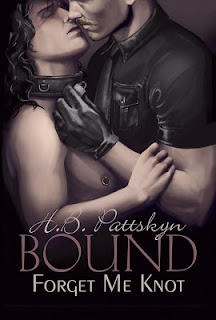 Thanks for the friendly place to have a rant! There’s something that’s been bugging the snot out of me for ages—or at least since the third or fourth review of my second novel Bound: Forget Me Knot came out last year.

I expected to get a few dings for Jason’s infidelity. It’s not exactly cheating, he and Henry aren’t solidly together at that point (in fact, Henry keeps telling Jason they’re not a couple, because Henry, bless his sweet heart, is an idiot). What I never expected to have happen was for readers to call Henry out for being unfaithful—because he isn’t! Not once. Not even a little.

The problem is two-fold. First off, Bound: Forget Me Knot is told exclusively from Jason’s point of view. Readers know what’s going on in his head, but they have only Henry’s word about what he’s doing or not doing when he and Jason are apart. Apparently, some readers don’t believe Henry when he says he hasn’t had sex with anyone since he and Jason met.

Henry and Jason live about 6 hours’ drive apart—and even if they didn’t, Jason is a bit new (he’s so wet behind the ears, he practically squeaks when he walks) and would totally freak out if Henry said “Hey, I’m supposed to do a sounding demo next week and you’re going to help me.” Yikes. No. That’s beyond Jason’s comfort level and Henry knows it.

Jason, on the other hand, will not play with anyone because by the time they sign a contract, Jason has already proven he doesn’t always act in his own best interest (okay, even Henry admits it was at least partially his fault for sending mixed signals) . As much as Henry wants Jason to get out and experience other situations, he doesn’t want Jason to get himself into trouble (again).

And my, that’s good to get off my chest! Thanks again for the safe place to vent.

Email ThisBlogThis!Share to TwitterShare to FacebookShare to Pinterest
Labels: author rant, Bound: Forget Me Knot, H.B. Pattskyn, Under the Covers